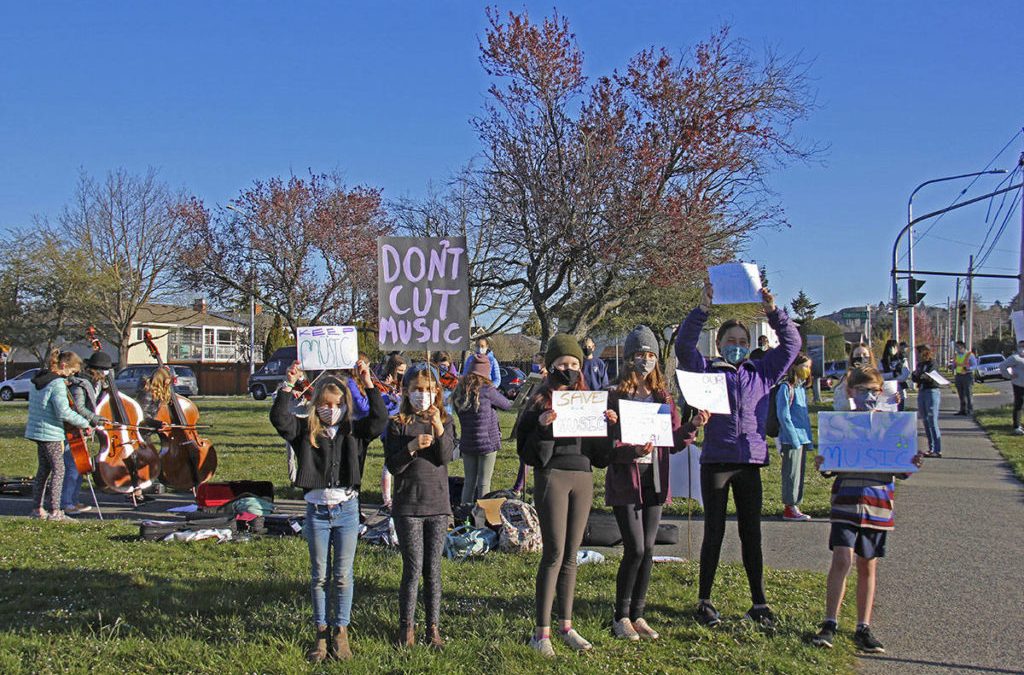 Fearful of losing the thing that gets them through the school day, a couple of dozen students gathered in front of their middle school Monday morning to play their instruments in protest of proposed cuts to music programs.

Last week, the Greater Victoria School District released a draft budget for its 2021-2022 school year, revealing an over $7-million deficit and plans to make significant cuts to its elementary and middle school music programs.

Standing outside Lansdowne Middle School south campus on Monday, Gareth Gaudin called the $1,566,360 proposed cut “creative profiling.” His two daughters depend on the music program as the one thing they enjoy going to school for. Why, Gaudin asked, is funding always cut from the arts?

If the budget goes through, all band, string, ukulele and choir programs for Grades 6 and 7 will be eliminated. A possible exploratory, or general, option could replace them. Those in Grade 8 will be left with an optional band program to transition them into high school.

“It’s an easy target because they’re not protected by provincial models,” Greater Victoria Teachers’ Association vice-president Carolyn Howe said. Provincial funding, she explained, is divided between students in Kindergarten to Grade 7 and students in Grades 8 to 12. For music, those in the first category only receive funding for “prep” programs.

When the school district decided to create middle schools, Howe said, it committed to investing in music programs itself to fill the gap in provincial funding and give students in Grades 6 and 7 access to more in-depth options.

“That music can be a thread that connects you through those three levels (elementary, middle and high school) of schooling,” Howe said.

Laura Walters, who has two children in the Lansdowne Middle School music program, said she is shocked these cuts are being made during a pandemic. Music, she said, is the one thing that has kept her kids’ mental balance over the last year. “Music touches our souls,” she said.

“Participating in the arts is really meaningful,” Howe added. “It lets students express themselves and it gives them another way of relating to the world around them.”

In a letter to parents, school district superintendent Shelley Green emphasized that no decisions have been made and that the budget is subject to deliberation by the board.

“I know the upcoming weeks will be difficult as we come to realize the items in the budget we simply cannot sustain,” she wrote.

Those interested in providing feedback have until 4 p.m. April 12 to take part in an online forum at sd61.bc.ca.

The school board met on Tuesday to discuss the budget and a public information session is planned for April 21. The full budget proposal can be viewed in the agenda section of the district’s board meeting page.

See the article at VicNews.com